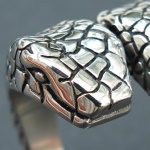 Out of curiosity we were looking up The Contender, just to see what it was like, because we are making more use of a cage and will need something of better quality.

My wife spotted the Kali's Teeth Bracelet. Has anybody here used one and how was it?

However for longer term wear my wife thinks the Kali's Teeth Bracelet would be amusing (for her). I'm thinking it might be a bit to painful.

My experience is that this makes my dick grow.

To the point where the points have left permanent marks.

So have fun but be careful.
0 x
Belong to Miss Karen / femdomstel
Top

I don't think I'll be trying that one. Thanks for the warning.
0 x
Top

I don't think I'll be trying that one. Thanks for the warning.

Some of that depends on who makes it, how it's made, and how it's used.

There are several variations of designs, IIRC one of the earlier designs I saw (c. 1990s) incorporated some rather sharp spikes, but a lot of them very close together. Designs with fewer spikes would [probably] be more painful.

Also, there is some difference between wearing one and allowing any potential erection attempts to subside, and wearing one while being teased and intentionally kept erect for some period of time. I have had some experience with a device that had a single row of teeth in an elliptical shape, the teeth were maybe 1/8" long and fairly sharp (think of an inside-out, small-toothed gear in an ellipse), with a fairly small circumference (maybe 3/4" x 1"). Locked on when flaccid it wasn't too bad, but when teased to erection...yowsa. (In spite of the pain, I was able to remain erect and even orgasm.)

Does that make me a "pain-slut"? Considering that I have also been able to reach orgasm via e-stim, with current high enough to leave some rather nasty looking burns....maybe...
0 x
04/07/19 "And then I 'punished' you by making you lick my pussy after I let my other 'boy' fuck me." --Mrs. Twisted
Top

johnsub wrote:My experience is that this makes my dick grow.

@johnsub, are you referring to the Kali's Teeth Bracelet made by Male Chastity Now, or the Ring of Tears?

The Ring of Tears' wide, blunt spikes are few, as are the number of its spikes, which will intensely press seven areas of skin.

The Kali's Teeth Bracelet's numerous teeth capture skin across the tips of the teeth as well as in the numerous open spaces between the teeth. When you become aroused and expand into the teeth it's like experiencing a thousand piranha nibbling the circumference of your penis.
0 x
www.malechastitynow.com
Top
Post Reply
5 posts • Page 1 of 1