I felt the shackles being unlocked from my ankles and the heels being removed. The handcuffs came off leaving just the blindfold in place. Mistress led me to the bedroom, put leather cuffs on my wrists and ankles and secured me spread eagled on the bed before removing my cage. I was told that the girls could tease and use my body anyway that they wanted for as long as they wanted. Mistress told me to enjoy my reward but that I was not allowed to climax. I was to warn them anytime I was close to the edge. The girls were told the only rules were that they had to remain silent so I wouldn’t know who was on the bed with me and that they had to stop any time I said I was close to let me calm down and recover.

Footsteps, the door closing and total quiet. I thought I was alone until I felt the mattress give under someone’s weight, first to my left and then to my right. Four hands started to trail softly over my body lightly pinching my nipples, cupping my balls, softly stroking my rapidly developing erection. Like it was choreographed the touch went from light stroking to raking of fingernails. The bed shifted again as another girl joined at my feet her nails joining in, raking form my ankles up my legs. I now had six hands teasing me from my neck to my ankles. Pleasure and torment at the same time. The action became more aggressive. Fingers pinching and twisting my nipples, two sets of nails raking my sensitive inner thighs, and another pair of hands cupping and squeezing my balls as she slowly stroked my shaft. I was moaning at the pleasure my body was feeling when they all stopped. Shifting on the bed around me. Are they getting up? Leaving me? I got my answer as lips and teeth attacked my nipples. As I jumped from this a tongue ran up my erection causing it to jerk enough for her to wrap her lips around the head and start to take me in her mouth. The girls on my sides started moving from my nipples up to bite my neck, kissing me deeply, sliding down to nip my inner thighs, lick and suck on my balls…anything they could think of to use their mouths for. At times I had three mouths on my cock, one engulfing me in her mouth and the other two kissing and licking around the base and my balls. Once they settled on this assault I only lasted about five minutes before I nearly screamed that I was ready to cum. Everything stopped and hands started to stroke my body softly as I calmed down. In turn, each girl kissed me softly as she got off the bed. The door opened and closed and then silence again.

I was left alone to recover for what felt like an eternity but was probably only ten to fifteen minutes when the door opened and closed again. In a few minutes soft female bodies joined me on both sides. Warm, naked flesh against my skin as they rubbed against my body and softly stroked me from my neck to my inner thighs, avoiding my nipples, cock and balls. It seemed they only intended to tease me until they moved. The bed shifted as one of the girls moved between my outstretched legs and the other one straddled my chest facing my feet. My cock was covered with oil as both ladies pulled and stroked to make sure I was as hard as I could get. Movement again as one girl moved up my body to lower her pussy to my mouth and the other one straddled my pelvis to lower an incredibly tight pussy slowly onto my shaft. As my tongue got busy licking one pussy the other girl started to gyrate slowly on my cock. It was obvious that neither of them was in any hurry as my tongue was directed where it was wanted and the pace of the other one was kept slow and steady. Every few minutes one of them would pinch or twist my nipples but most of the time it was two pussies using my body for their pleasure. That is not to say I wasn’t enjoying the activities. I love serving a woman orally and it had been almost three months since I had been allowed to penetrate a woman. Still, my pleasure was lessened somewhat as I had to concentrate to avoid going over the edge. I was trying to figure a way to let the girl impaled on my cock that I was getting too close when they both stopped and switched places. This time they mounted their toy back to back. The girl now putting my tongue to use wrapped her fingers in my hair to guide my mouth and control the intensity of the pressure. The other one had my cock bent back as she leaned toward my feet, creating amazing pressure on the shaft. Each time she lifted she stopped so that just the head was still inside her. She would flex her muscles in this position before sliding back down to engulf me completely. Again, there was no hurry on her part. As she continued to ride me she began to slap my inner thighs with what was unmistakenly a riding crop. The hits weren’t hard but on the tender flesh that was her target they got my attention. After a while her speed increased and I felt her vaginal muscles spasm in an orgasm just as my mouth was pulled tight into the other pulsating pussy. Both girls stayed in place to catch their breath before dismounting. I could hear the rustle of clothing as they dressed and, like before, both girls kissed me before leaving the room.

This time I could hear their voices as the ladies talked some more until, one by one, I heard the front door close as they left. Mistress came in, kissed me passionately and told me it was her turn. She released my ankles but left the blindfold in place and my wrists restrained. She washed my cock and balls with a soft sponge and warm water then dried me with a soft towel. I was told I had permission to cum but to try to make it last before Mistress began a slow, sensuous, teasing blow job. She would engulf me entirely then pull back until just her lips were around the head. Her tongue would play with the slit and circle the head as she sucked on it before going back down all the way. I was on the verge when she stopped. I thought that once again I was going to be denied a full release until I felt warm oil being drizzled on my shaft and her hand close around me. She varied both the speed and pressure of the hand job, slowing down and letting up each time she sensed I was getting close to loosing control. Mistress must have edged me at least ten times before adding more oil and pumping my cock to one of the most amazing climaxes I have ever experienced.

After cleaning me up with tissues my wonderful wife released my wrists and we cuddled in silence a while before heading off to take a long hot shower together. After she soaped and washed my entire body I started to do the same for her. She stepped around me, turned off the water, said today was just for me and got out of the shower to dry off before drying me. I fixed us both drinks and we relaxed before dressing and heading out to our favorite restaurant for dinner.
4 x
Kitten's Boy Toy
I'm Kitten's property and She keeps Her property secure in a Jail Bird!
Top 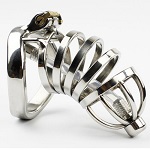 So it was truly a reward! Nice writing KBT!
0 x
Currently locked in her A276 with a BW lock, custom key by Chastity Shop
Top

Thanks for the compliment. Glad you enjoyed it.
0 x
Kitten's Boy Toy
I'm Kitten's property and She keeps Her property secure in a Jail Bird!
Top
Post Reply
3 posts • Page 1 of 1