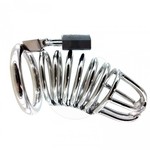 Is there such a thing as an orgasm-proof chastity device?

For the last 6 weeks I have been locked 24/7 in this device. I have even purchased the "short" version as well as the regular length tube. Despite being, what I would consider to be a "good average" size, I am currently locked in the short version which I have to say is a bit of a squeeze.

My wife poked at the cage with her toe and said somewhat disparagingly "what's the point of that thing?" - to which I had no answer.

Admittedly, on both occasions I was super-horny and close to the edge, but I had hoped that the small cage would prevent me from being able to achieve orgasm. I would really like a device which will completely eradicate the need for willpower, and put the control of whether or not I can orgasm firmly where it belongs - in the hands of my wife...

It all depends on the person. I have read about men who can reach an orgasm (though definitely a ruined one in many cases) in every single chastity device out there. Ones with spikes, ones with urethral rods, full waist belts, ones that are extremely downward pointed, etc. It all depends on how you are wired and what your pain tolerance is.

Based on what you wrote, if it is that important to you and your wife that you're not able to orgasm, I would look into the types that either include a urethral insert, or have some kind of deterrent included - usually pins or spikes in it. Personally, I don't think that the spikes (especially if they're sharp) are smart for long term wear, but if you know you're going to play and get extra excited, switching to it might be enough of a deterrent. You could also just try numbing cream if you know you're going to be having some fun play with her, but not with the intention of having an orgasm.

Ultimately though, it is a personal thing.
0 x
"Some people need to be caged before they can be free." - Anon
Top

Thanks for this really helpful reply.
I do have a CB6000s as well which includes the "points of intrigue" spikes. However, I do not like this for extended use (indeed I only have it for travelling). So far I have not worn it it for more than 3 days (with the "medium" spikes). To be honest, I'm not sure that would have made much difference.

I am curious about devices with urethral inserts. I'm guessing however that such a device would not be suitable for long term wear?
0 x
Living happily in a FLR/WLM - Locked 24/7 with no access to the keys
Last period - locked 7 months, 3 weeks, 3 days
Currently locked since 22 July 2017
Top

Short answer: if you're aroused enough, nothing will keep you from some kind of release.

Not even the full steel belts are enough to keep some guys from having a ruined orgasm. That said, Mrs Edge often tried to get me aroused enough to do just that, and would say "Oh good, now I don't have any reason to unlock you."

I will say that after a few months when the novelty wore off, it took longer and longer between times that would happen. At first it would be every couple of weeks, but eventually it would take maybe 2 months to get to that point again.
0 x
Tom Allen
The Edge of Vanilla
Mrs Edge Says
Top

There have been some anecdotal reports of UT infections while wearing devices with urethral inserts. However, the nature of those reports is such that there is no way of verifying, and it is quite unclear as to the exact mechanism of infection (if true), and none of the reporters has specified the type of bacteria responsible for the [alleged] infections, which would give some indication of how the infection was caused.

Infections may be caused by STDs (Chlamydia, Gonorrhea) which may have been contracted by the wife/SO and passed to the male (possibly without his knowledge of her being infected, or that she was intimate with another party who passed the infection to her). These are, in fact, the most common UTIs.

Infections may also be caused by other bacteria, and we have no knowledge of the reporters' sanitary precautions while inserting urethral devices. Frequent removal and reinsertion without appropriate sanitizing of the device could increase the risk of infection.

We also have no knowledge of the reporters' sanitary/hygiene practices while wearing a device with a urethral insert. Fecal material contains e. choli bacteria which could enter the urethra and cause an infection. This is another leading cause of infection, lower on the list than the first two mentioned but still notable, and especially prevalent in men who engage in anal sex without proper preparation of the receiver and without using a condom. However, this also suggests that there may be increased risk of such an infection if the wearer of a device is not scrupulous about personal hygiene- fecal material in clothing could present an opportunity for e. choli bacteria to migrate into the urethra, aided by the urethra being presented in an unusual condition with the insert. In my opinion, this risk would be somewhat higher in those who wear briefs instead of boxers, who do not clean well after a BM, and further compounded if they are not in the habit of changing their underwear on a regular (daily) basis.

Given this lack of knowledge of the true and complete details surrounding the reports of infections, it is impossible to assess whether the device itself could be responsible or if some practices by the reporters contributed to or caused the infections.

It should be obvious, however, that if one chooses to wear a device with a urethral insert one should be very careful to observe exceptionally good hygiene practices- sanitization/sterilization of the device upon removal and reinsertion, personal cleanliness* and regular changing of clothing.

*(If taking a shower/bath or using a bidet after a BM is impractical, I would suggest the use of Witch Hazel or the pre-packaged moistened wipes which are now available in order to clean better than can be done with TP alone.)
0 x
04/07/19 "And then I 'punished' you by making you lick my pussy after I let my other 'boy' fuck me." --Mrs. Twisted
Top

Tom Allen wrote:Short answer: if you're aroused enough, nothing will keep you from some kind of release

Very interesting article by the way. I would have to say that in my case it was definitely an orgasm (rather than some sort of ejaculate release - i.e. a milking), but being locked in the small cage and unable to really "go for it", I would have to describe it as a ruined orgasm. Indeed, just over 24 hours later, I would say that I am already getting close to being back in the attentive, obedient zone that comes with prolonged denial. Normally this would take much longer.

It is a pity however that this situation has occurred. It put a bit of a dampener on our weekend. I just wish there was a device which made this impossible. I guess, for me, this isn't possible...

TwistedMister wrote:It should be obvious, however, that if one chooses to wear a device with a urethral insert one should be very careful to observe exceptionally good hygiene practices- sanitization/sterilization of the device upon removal and reinsertion, personal cleanliness* and regular changing of clothing.

I am scrupulous about personal hygiene, and always make sure that my BM is before my daily shower.

Does anyone have any experience of wearing a device with a urethral insert for extended periods (i.e. weeks rather than days)? Apart from infections, what about discomfort? Any risk of long-term damage?

Based on my knowledge, everything mentioned by TwistedMister, is exactly accurate. And I have definitely heard from men who I trust who use an insert and use it long term. They do however have remove the insert every few days to clean it. Even though urine is sterile, it can stay in the tube and bacteria can accumulate, so regularly cleaning is a required aspect for the inserts.

Note: I have not read anyone who uses one of the plastic tube ones for long term wear. These are always the steel ones.

By the way, while I understand how your experience can put a "bit of a dampener on our weekend" - I would hope that you both approach chastity as a learning experience. The reality and the fantasy of chastity (as with many things in the alternative sexual lifestyle) are sometimes vastly different experiences, so it is my experience that keeping the lines of communication open and learning as you is the most critical thing to enjoying the journey.
0 x
"Some people need to be caged before they can be free." - Anon
Top

SteveT wrote:It is a pity however that this situation has occurred. It put a bit of a dampener on our weekend. I just wish there was a device which made this impossible. I guess, for me, this isn't possible...

I think I understand why it put a damper on your weekend, but keep in mind that there are several factors at work here. One of them is that when you're new at this, it's overwhelmingly exciting, and I'm stressing the word "overwhelming." I can't tell you how many times at first this used to happen to me, and in various degrees. Sometimes it actually did feel like an orgasm. Other times, it barely felt like anything, and a few times I've had semen just leak out with no actual sense of relief. But the more we played at it, the less overwhelming it became. After a few years, it rarely happened spontaneously.

For your wife, that may be helpful to know; Mrs Edge used to enjoy seeing how long she could go keeping me locked up, and she used the caged releases as an excuse to keep me locked for longer and longer periods. Instead of being disappointed that the device "didn't work," she tried to appreciate that some things in my body were just working in different ways.
0 x
Tom Allen
The Edge of Vanilla
Mrs Edge Says
Top

Ive struggled with this msyelf. I truly wanted a device I could not orgasm with when I was wearing it. I mean whats the point if you can orgasm? I'm sure what works for me may not work for others. But I found that even with my custom made contendor I could orgasm in becauase of the pressure and josling it around. I now have the tube jacket 02 from steelworxx and so far so good. When I get erect there is pressure but its on the base of my penis and not the head or frenum. I am also unable to stroke it, not that it would do any good as my frenum is nicely hidden away.
0 x
Top
Post Reply
11 posts