So, how many devices *do* you have, anyway?

Well, I'm up to SIX with the recent additions of a new Steelworxx Steelheart, and two DH Gate devices. I think I'm good for now, though I am a little intrigued by some of the newer nylon/plastic devices out there. I'm just not sure I feel like buying 2 or 3 to eventually get down to the correct fit!
0 x
-Dan 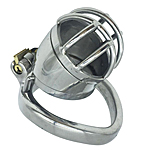 I eventually got a 3000, but I never really liked it because of cleaning Issues. It split at the seam, pinched, cut, and scarred me. Screw that toy.

I’ve had a cool full coverage stainless steel one, but It was damn near impossible to clean. It had an insertable loop thing to prevent pull-out.

I also had some giant cage thing that bolted together, was giant, and weighed a ton.

I eventually created a lockable leather thong to attach the 2000 to. It’s pretty hot.

I lost them all. O-well.

Now I have three cheap stainless steel ones from Jeff Amazon. The latest one—pictured in my avatar—fits like a dream. One of them has a 40mm c-ring, and is too small for me.

I voted for two.

CB 6000 silicon purple (the wife likes purple) wife prefered the look. But it can't hold back my erections. They burst through it.

Holy trainer 2. Plasric. Yep. These are a good fit. Ring works. Kinda holds things back. No good for long term due to cleaning too often. White looks wrong. But this is great for airport security so goes on while travelling.

Steel cage. Hinged. Barrel lock. Expensive.but very nice. Wife says it looks like a fashion accessory.
I got small after reading a blog by Thumper.
But.. due to my growing morning wood or sex while caged is agony. Swelling, bruising etc. Two days recovery. Shame. We like it.

3" cage. Worn 3 weeks 24/7 with no issues. But needs a shoe lace to sop it sliding down my sack. I also hang low so cage can travel 2" before hitting ball. This one works ok. Ring is as small as I dare go. Fixed. Turns purple if the cage is taken off while erect. Which is the only time it's allowed off (after wife duty). Any smaller would be baaad!

Steel cage with steel cat tube. Scary. I like it. But can't get used to it enough to go a full day.

I did a little search; please forgive me if that is a repeat question.

How is it decided which one to wear?
0 x

Just had to up my vote from 4 to 6 - had a delivery of a the short DHGate 316 (already had the standard length), and a knock-off HTv3 nub yesterday (have got a knock-off V2 small too).

I wore the short 316 last night for some playtime with Lucy (guess which of us got to orgasm... clue, it wasn't me

), and have kept it on overnight and today for a meeting in London. I'm finding it pretty comfortable when flaccid but my balls complain when I get hard (so they should!) - I might have to play around with ring sizing.

Lucy likes to be able to grab and feel me when I pleasure her, so the shorter cages aren't ideal for this, but with plenty of toys in the box, we should be able to keep both of us happy.

Not plucked up the courage to try the nub yet - I think that might be a step too far (well, too small...) for Lucy to enjoy, but I'm sure we can find special occasions for it!

Have reduced my collection by one - the pink knockoff HT 2 (small) has gone in the bin. Never wore it, it chafed, and it was part of the exploration that brought me to stainless steel.
To be honest, though I'm currently doing honour, I only really wear one of the three. One is my first cage which is a bad fit, is completely visible under clothes but does look the part, and the other is a slightly longer version of my fave cage which is nowhere near as comfortable.
The fave remains a short (two hoops) open stainless steel number. Just waiting for the order to suit up.
0 x
Top

I have three but..... I don't have three that I switch around and wear at different times. Each time I have purchased a new chastity device I have gone to a better, more comfortable device, and have then retired the older one to the storage bin.

This first one I had was the CB-2000. Way to clunky. Very affordable at the time, and came with different sized rings at no extra cost.

The second was the Holy Trainer v2 - very light, nice design, comfortable and moderately priced. I initially ordered the wrong size base ring, and had to spend the money for a smaller base ring, which added to the cost.

The third was the custome made Steerworxx Looker01 Titanium with urethra tube. By far the best and most comfortable device yet, but the most expensive. The Looker01 is not one that is bought on a whim or for the type of guy who is just experimenting with chastity. Steelworxx is definitely a serious commitment. I wear it pretty much 24/7. It stays on for three weeks at a time on average. It basically only comes off when Dom husband deems that I need to thoroughly clean my cock, shave my cock and balls, and allow my cock get fully hard. He is very concerned that my cock remains in perfect working order for his pleasure.
0 x
Top

We are saving up to get one of Lori's and once w ehave that and we are sure we need no other I thinks it time we had a clear out.
As has already been said.. How many more do you need.
I'm not concerned about keeping a plastic one to switch for travelling.
And my Lady says she does not care how many people see me wearing a chastity device.
0 x
Top
Post Reply
213 posts