Tom Allen wrote:I used to fantasize about it, but never told any of my partners because it just seemed too, well, weird or something. So, the first time was when my wife and I were dating - but interestingly, we hadn't talked about it previously. We experimented with tease & denial (not having any real terms for it back then), but one night some role playing just escalated.

Yes, of course I wrote about it.

We've never really repeated that episode, and the few times we did, I still needed to be "forced" in some respect, because immediately afterward, well, it goes from a fantasy to eewww.

'Eewww' is right, I need some kind of force, too. I'm not sticking my face in that of my own free will.

I don't like it either. Bad enough straight, but after mixing with the vaginal juices it seems even worse to me.


Finn wrote:... I was involved with another kink couple years ago (where I got my first experience with chastity) and did get put on cream-pie clean-up duty one time.

That's another of my fantasy scenarios- being forced to perform 'clean-up duty' for one or more other couples, without having been allowed an orgasm of my own [first]. I have to wonder if I would be less 'unwilling' and therefore require less force to compel me to perform, or if I could be made horny enough and so desperate for an orgasm that merely the promise...or suggestion that I *might* be allowed one afterward (if I perform well enough) would be sufficient to compel my performance with little more force than my hands being cuffed behind my back and a firm grasp on my head.

A variation of that would be having to 'clean up' one woman after a gang-bang. Mrs. Twisted has made the suggestion of sitting on my face and making me clean her after watching her fuck three other guys. I don't know if she would ever really do it, but the thought that she might (and could, if she wanted to) makes me hard as hell.


Finn wrote:Being denied 2 months and pretty aroused, it was not so bad, as you had the mix of tastes.

I've been there too, and you're absolutely right.

Yeah. I have some 'forced bi' fantasies too, but no desire to be sexually involved with guys just to do it with guys- there has to be a woman involved and making it happen. But no kissing though, that's one of my hard limits, the thought of kissing another guy is totally revolting. Odd, isn't it? The thought of being restrained and forced to suck another guy's cock or get fucked in the ass can be erotic, but the thought of kissing one (or analingus on one) squicks me right out.
0 x
04/07/19 "And then I 'punished' you by making you lick my pussy after I let my other 'boy' fuck me." --Mrs. Twisted
Top

No, not really. We as guys can relate to the same parts and we are aroused by our own cocks. If you are more bi comfortable than bi, then it makes perfect sense that we gain comfort by the focus being on the fantasy and the woman, not the other guy. Kissing a guy really requires being, or having some fair degree of being bi, while the more anonymous sexual contact simply requires that we be sexual and aroused. The other guy of the couple, was also more feminine in behaviour, rather than manly man stuff, so that helped. He was bi, and enjoyed going down on me, so she would watch that and coach him and do humiliation play with him as he sucked. The thing was though that in the end, they both got to orgasm, while I was locked back up while in a frustrated state. To her, my cock was one of her dildos and not allowed orgasms. It sounds more exciting that it was, in that play sessions were not super frequent, and mostly I stayed locked up. Still, it was intense while it lasted.
0 x
Living with my 2 favorite people, in a semi-poly situation. Serving my Mistress Crosby, who holds my keys.
Top 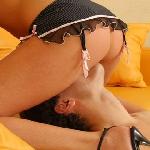 Been there, done that (several times). It wasn't too pleasant, but hey, I was eating pussy too, so I didn't care so much. I've actually eaten pussy where everything smelled far worse than that, so bad that I had to block my nose, and actually orgasmed from doing that as well, so this was a walk in the park.

In fact, I think if I ever did come inside my wife again, this would probably be a requirement.

Was funny though, the first time, my wife said, "See, now you know what it tastes like too" when I made a face after coming up. This is probably why she's never offered to give a blow-job, ever. I got her to do it once, but boy did I have to work for that, and it hasn't been repeated since.
0 x
Top

LOL, too bad. (I like to tease and instigate too.)

The reality is that all women taste different, and I'm told that we guys all taste different, so there really isn't any set rule of taste on this one, beyond don't eat asparagus. Mind you, there is often a difference between the taste of a person who smokes vs. doesn't as well. The one time I had to eat a creampie, it wasn't particularly yummy, but it was incredibly hot to lie on the bed beside them as they went at it, have her turn her head to look at me and tell me I'm going to eat all of it (while she is being thrust into) because I'd stroked my cock. Seeing him orgasm into her and looking into her eyes as he empties every drop. Seeing her mischevious grin as she says "ready?" and moves over to straddle your face. Seeing her soaking wet pussy mingled with cum as she lines your face up and slowly lowers it onto your mouth. Thinking "OMG this is nasty!", but hearing her tell you to keep licking as she grinds into your face for her orgasm. Basically, it should be a bit nasty, but not too nasty.
0 x
Living with my 2 favorite people, in a semi-poly situation. Serving my Mistress Crosby, who holds my keys.
Top

Our most recent post about it, with a different twist

The reason I don't like to eat cum after having an orgasm has nothing to do with the taste. I had never tasted it so I didn't even know what it tasted like and I still wouldn't do it on my own. Now that I have experienced it, it still has nothing to do with taste. As a matter of fact after I start eating my wife (getting over that hurdle, with strong "encouragement" on her part) I rather enjoy the whole experience. Not that I love the taste, just that I am not repulsed by it either.
0 x
Celtic Queen wrote: Some stuff works for some people, other stuff doesn't and you just have to adapt the lifestyle to what works for you both.
Top