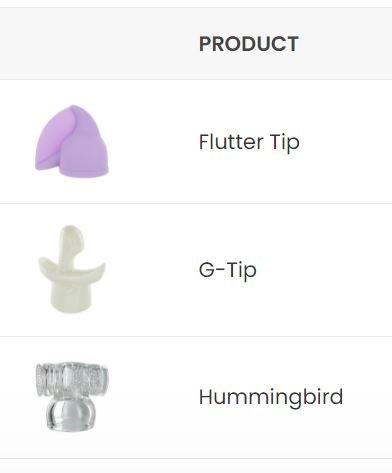 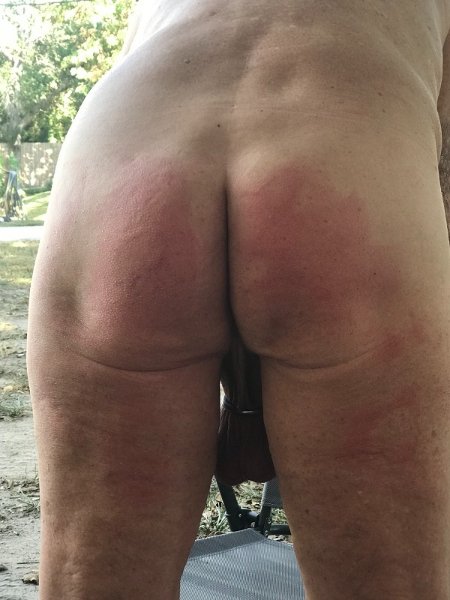 We spent Halloween weekend at our favorite resort in the RV. Sunday I showed her some small red sites at the waistband to the left of center on my back. She said it looked like spider bites to her. By Monday afternoon when we pulled out for home there was a light rash on my left cheek. We threw a belt on the alternator, spent the night in a strip mall parking lot and didn't get home until late Tuesday afternoon. By this time I was having pain from my ass. I got the golf cart offloaded, the trailer unhooked, and the RV parked and plugged back in to shore power. I went inside and took my jeans off. The rash now covered my left cheek, wrapped around the outside of my leg and down the front almost to my knee. Worse was it had extended almost to my waist in front and in the left side of my crotch and scrotum. Now it wasn't just a rash but developing blisters in the rash areas. The cage came off immediately. This was after normal work hours and my doctor's office is closed on Wednesday. During the night it hit me that I have Shingles. I hadn't considered it earlier because I was vaccinated after I turned 50. Before my doctor's office opened on Thursday I did a little research and pretty well confirmed my self diagnosis. I got in to see him on Friday afternoon and right now I'm on Tylenol 3 for pain, a Lidocaine patch (also for pain) and an anti-viral capsule. The recovery time is normally 2-4 weeks but he warned me that it could take longer since it was 5 days before we started treatment. The rash is already starting to recede and the blisters have changed to a darker color as the dry up. Looks like I am going to get lucky with the healing time.

Bottom line...If you've had Chickenpox get the Shingles vaccine. I am proof that, obviously, the vaccine doesn't guarantee you won't get Shingles but it gives you a better chance. Trust me, this is one you don't want.
Last edited by KittensBoyToy on Wed Dec 22, 2021 8:56 am, edited 1 time in total.
0 x
Kitten's Boy Toy
I'm Kitten's property and She keeps Her property secure in a Jail Bird!
Top

I'm hoping everything heals up over the next week and a half since we are supposed to go to the resort on the 2nd of December. It is the Christmas gift exchange and M'Lady's birthday weekend. She has been looking forward to it and I don't want to cause her to miss it. Worse case is I have to stay at least in a pair of shorts so I don't freak anyone out.
1 x
Kitten's Boy Toy
I'm Kitten's property and She keeps Her property secure in a Jail Bird!
Top

Christmas was light this year. I got two things for M'Lady. I got her another book to add to her growing library. The newest addition is "The Ultimate Guide To Tease & Denial" by Georgia Ivey Green. She said I might just regret that one before it is over and done. Her other present was a pencil sketch I had done for her.

I made the frame and took it to the local Hobby Lobby to have glass and a backing cut for it. I asked the girl working the framing section if she could mount the picture for me, cautioning her that it was a nude drawing. She said it wouldn't be a problem and gave me 2 pieces of backing to cover it while I carried it through the store. I handed it to her face down and indicated which was the top of the drawing so she could orient it in the frame without having to see it. She immediately turned it over, looked at the drawing, smiled and set it in the frame.

I was worried about how M'Lady would react to this present but she loved it. It is hanging on the bedroom wall for now but I have already been told it5 will be moved to the RV bedroom wall where she can see it from the bed. 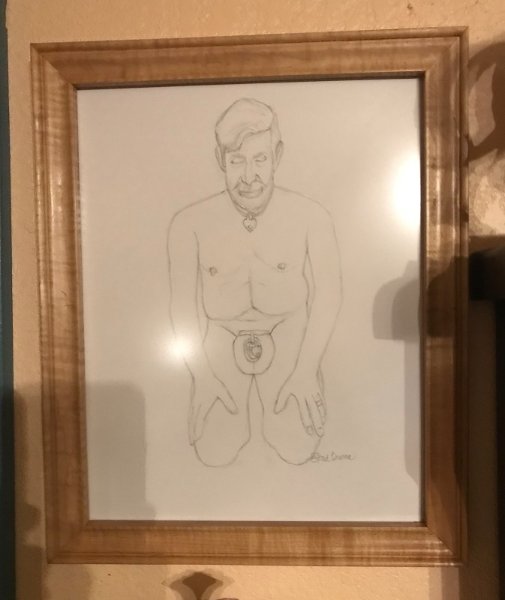