I spent a bit of time in the shop yesterday. Got the briefcase conversion done. Kitten had asked yesterday if it was going to be ready for tonight. I'm starting to work on some projects I have been putting off for way too long. Got a start on putting a lock on our liquor cabinet. That will be done this morning and I am going to try to get a wall mounted lumber rack done for my storage shed.

Tonight we are going to the NYE party at the club. It is a formal affair but, considering the question I mentioned above, I'm not sure how long I will be in my tux.

Last night I got treated to a fantastic tease session. After we had settled in Kitten started idly playing with my nipples. This soon turned into her working over one while she was pinching and twisting the other side. It only took a SHORT few minutes to have me straining against the bars. When she started raking her nails through the bars I was in Heaven and Hell at the same time. Heaven from the delicious teasing and torture I was getting and Hell having the cage stifle my attempt to get hard. After what must have been 20 minutes or more she told me that she would get a turn, too. As much as I hated to end what she was doing I rolled her over and started with some passionate kisses and my hand found its way between her legs. She responded immediately, her breath getting short and her pussy bucking against my hand. It only took me a minute to change positions getting on my knees with my head between her legs. My tongue quickly attacked her swollen clit as I fingered her while she held my head in tight with one hand and played with my ass and balls with the other. It only took her minutes to have 3 or 4 orgasms, each one building toward a crescendo and stronger than the last one until she exploded into that massive earth shattering orgasm we all strive to give our ladies and Mistresses! I sat up on my knees beside her and continued to minister with my fingers to bring her back down slowly. When I laid down she was completely sated, her head on my shoulder and me totally frustrated, horney and happy.

Thank you, M'Lady, for allowing me the privilege of serving you!

I hate to butt in but “minister with my fingers” necessitated it. Brilliant phrase.
1 x
MCN Contender
Cherry Keeper
Top

I do have my momentary flashes of inspiration!

The New Years Eve party was a blast. The place was packed. Most of the regulars were there including some that come from as much as a couple of hours away. There were also a lot of couples at the club for the first time and we enjoy meeting them and trying to make sure they feel welcomed. I got to show off my work on the briefcase but, being that it was a formal affair I didn't expect much play time.

M'Lady is always beautiful and I clean up pretty good for an old redneck! 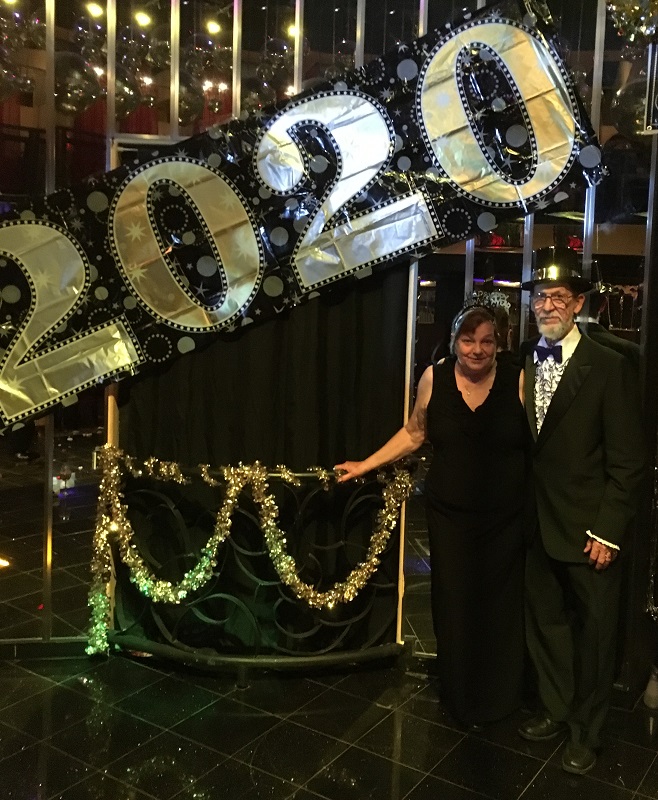 Couple of shots of the briefcase after the lining was glued in and the wood finished. I still need to add some type of retainer straps for the upper compartment but I haven't decided on how. 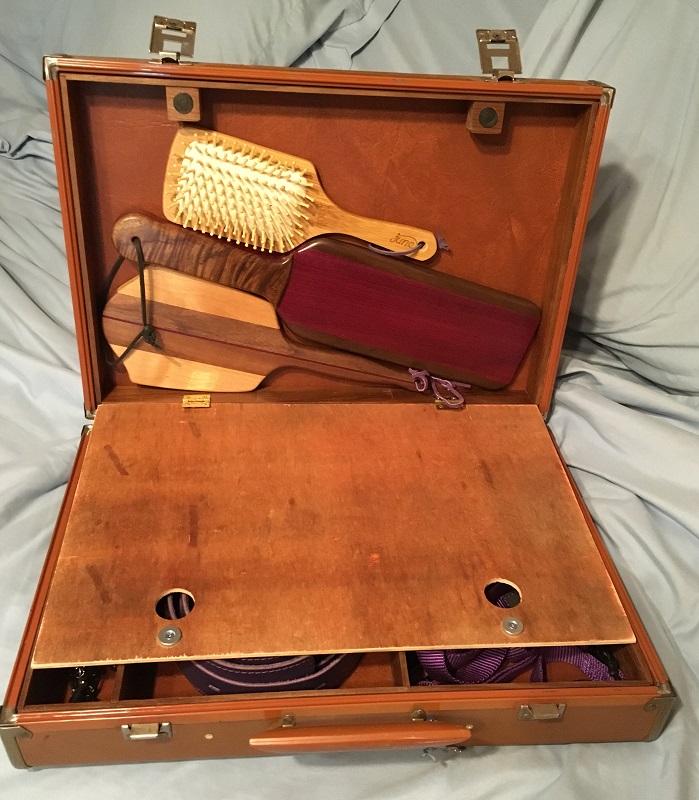 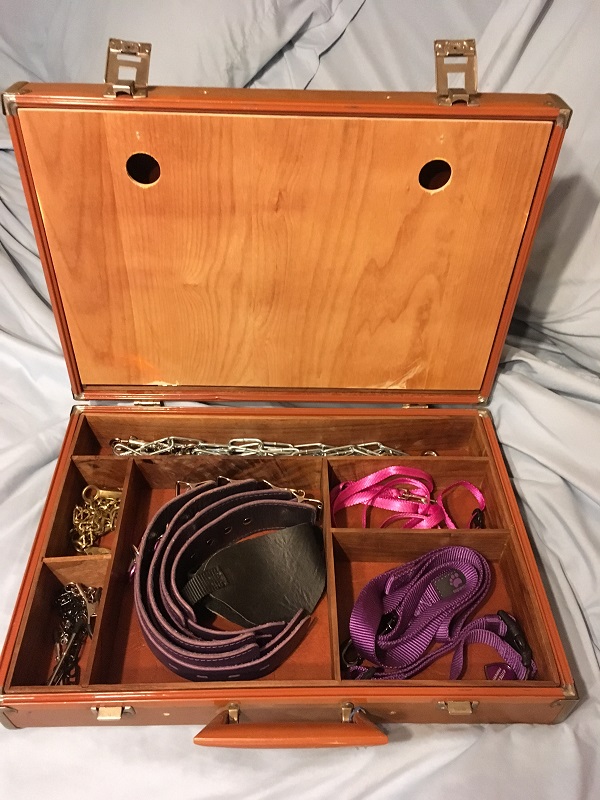 One down point to the evening. We invited a new couple to join us for a drink. Kitten offered them both a white Russian made with her homemade Kahlua. After that they proceeded to wipe out the bottle of Kahlua that was on the table along with finishing off the vodka. He abandoned her and left early and one or the other of them ripped off Kitten's riding crop. We couldn't prove it but she had complaints from 3 other couples she had approached and all 3 had something come up missing. When we left the owner had her at a table watching her so, unless her husband took everything out, the stuff is stashed around the club somewhere. At least the crop wasn't expensive and the new one was delivered this morning. Karma is a bitch and they won't be allowed back. I just hope it didn't sour any of the other couples on what is a wonderful club.
0 x
Kitten's Boy Toy
Happy to be Kitten's property!
Top

A wonderful night out with M'Lady. When she mentioned supper I suggested we stop to eat on the way to the club. The evening started with dinner, shrimp platter for her and flash fried oysters for me. Both kind of surprising since the restaurant is the "Catfish Parlor". She doesn't particularly like catfish and I rarely order it.

The club was kind of slow last night for a Saturday and a lot of the patrons were first timers. That always leads to a lot of socializing as Kitten likes to chat with the new people. Kitten had her crop, cat-o-nine tails and paddle with her on the smoking porch and I was once again surprised by her. A couple of the women indicated a desire to feel their effect and Kitten granted their wishes, quite enthusiastically! This happened again back inside with one of our friends who said she would love to be Kitten's sub.

When the club is slow we usually sit down stairs instead of going up to 'our' table. When some slow music came on I led my wife to the dance floor. When that song ended the next one up was just fast enough to jitterbug to without getting crazy. There was only one other couple on the floor and most everyone sitting around the floor was watching us. It has been a while and we were a bit rusty but it felt like early in our life together when people would stop dancing to watch us!

Around 1:00 she started playing around at the table teasing my nipples. At her direction I stood and leaned over her chair as she assaulted my nipples, her teeth on one as she pinched and twisted the other one. Her other hand was fondling HER cock and balls through my trousers and I was in pure bliss. When she pushed me back to my chair I went to my knees, pulling her bra down and her blouse up to get to her breasts. (Just a few months ago Kitten wouldn't have allowed any exposure except upstairs in the play areas.) I was more surprised when she didn't stop me as my hand slid up her leg to massage her pussy through her panties. Just a couple of minutes if that and she said it was time to go upstairs to the Queening chair. I was given the pleasure of taking M'Lady to several orgasms (I lost count around 6 or 7) before getting up. I was again treated to some delightful teasing but this time I only had a thong on and that got pulled down out of her way.

In the room with the Queening Chair is a mirrored wall behind a frame with eye bolts all around it. M'Lady had me hook my fingers in the highest eyes I could reach and proceeded to deliver several blows with her crop and paddle before telling me to get dressed. Trust me, this was not done in fun!

As we were heading back downstairs she had to make a bathroom break and I was left sitting watching 2 girls, one on the St Andrews Cross being spanked. We were talking to the dominate one at our table later I showed her the toy box/briefcase and paddles. She said she wished she had met us earlier. The reason for the hand spanking was that the other couple they came with had split early, taking all their toys with them and she would have loved to borrow some of ours. It was her first time at the club but she said we would see her again. Another Domme for M'Lady to conspire with. The St Andrews Cross is double sided so......

Not a lot to update but we did get to the club Wednesday night. It was pretty much a social night for us talking with friends and a few new people. We both started a year long mentoring program for Dommes and subs that started this week end. The 2 groups meet monthly and normally on different days. Based on my first session I am looking forward to the program.

Saturday I drove Kitten to her session and then went to Woodcraft to pick up some needed wood for upcoming projects. I also stopped by a motorcycle shop I had always wanted to check out. While there I talked to one of the mechanics who gave me an idea of what the starter problem with my trike might be. After coming home to drop off the wood, eat, and grab some tools I headed back to Austin and did some repairs to a couple of pieces of equipment at the Friends Club. The tie down rings on one of the spanking benches were loose, one of them completely off, and a couple of the frame pieces under the Queening chair were broken. I got the bench fixed and did a temporary repair on the chair. I did figure a way to make a better, permanent repair to the chair that will look like it was part of the original design. I'll set up a time to get that done in the next week or so.

Today I need to catch up on some chores I missed because of the busy weekend and try to get some shop time in. That is assuming M'Lady doesn't have other plans for my time.
0 x
Kitten's Boy Toy
Happy to be Kitten's property!
Top
Post Reply
196 posts