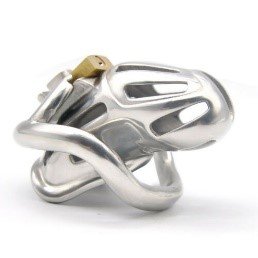 I don't know if pic will come out or not but just got this little unit as an experiment.
I thought since the back of the tube went under and out of the back of the ring it might prevent pull out.

It does not,
unit not at all better than any other I have in fact it's worse than some in preventing pull out.
It's not a terrible unit, a little rough inside but so far, only about five hours, it's not uncomfortable.

I have been wearing my BAW units for a while now, so I had forgotten how some tubes press so deep into scrot, but it's fun to play with different units.
If pic doesn't come up, I'll post a link.
Mikel
2 x
Currently locked in custom BA 20, triple base ring occasionally switched for BA 25 with double base ring.
Top

I've seen that one around! The offset of the back of the cage relative to the ring looks perhaps like a bit of a hinderance for comfort?
0 x
Top

That was the first cage I ever got. The integrated lock is a nice design. But you’re right it’s not super comfortable. It kind of drives the penis down into the scrotum. I keep it around for old time sake.
0 x
She is the Queen of our domain - and I am happy to be her consort. I await her good pleasure...and her pleasures are ohOhOH so good!
Top

I haven't played with it again, but I will keep it, maybe as a punishment cage for KH.
It does get uncomfortable, I tried to sleep in it, but it felt like my balls were being squeezed harder and harder, so I got up and removed it relocking in my BA unit so KH wouldn't be mad if I stayed unlocked.
I still think there's a way to stop pull out.
Mikel
0 x
Currently locked in custom BA 20, triple base ring occasionally switched for BA 25 with double base ring.
Top
Post Reply
4 posts • Page 1 of 1