I got sucked into a discussion on another forum, and it gave me an idea. This is something that I've been thinking about for a while, but only just had the light bulb blink on.

We all "know" what the term "permanent" means. Unfortunately, none of us can agree on it.

Because the conversation come up several times a month, and because everybody has their own variation on the definitions, I'm going to propose a matrix, similar to those political or religious ideology matrices that you see all over social media.

For you geeks, I've defined the two variables as: Chastity (i.e., the wearing of a device) and Denial (i.e., the allowing of orgasms). This is because whenever we discuss it, the two are inevitably intertwined, which is one of the reasons why we can't seem to agree on the terms, or we spend so much time explaining our own definitions.

I'm attaching a picture for clarity. 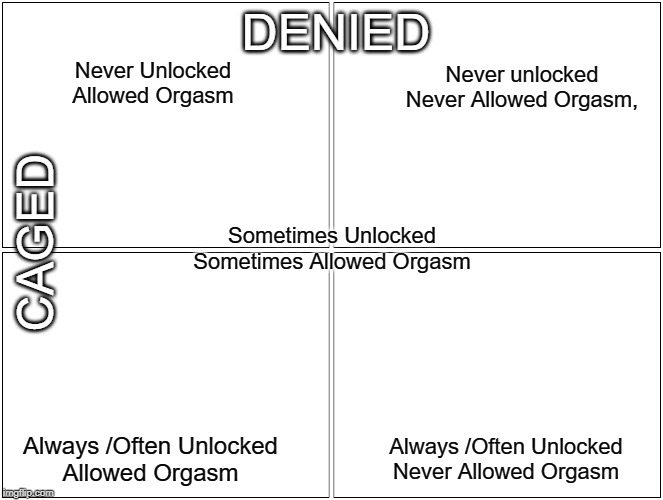 I'm offering this up for feedback. I thought about assigning each box a 1-5 scale to help those so inclined to more closely identify or explain how their own particular situation works. For example, if I'm almost always locked except for medical or travel, but I'm never allowed an orgasm, that might be a +4,+5. Someone who is locked up for a few weeks, unlocked for some T&D, and has regular orgasms might be a -3, -3. A guy who doesn't wear a device, but is only allowed an orgasm every three months might be -5, +3.

If nothing else, when we get those questions asking about "permanent chastity," someone can respond with "I'm a +3/+3, and my opinion is that..."

Had a snarky remark about hydraulic pressure and differential equations and it disappeared.

Also, I think I'll flip the chart so Chastity is the X scale (across) and Denial is the Y, simply because that's the order that we're used to working with (X, Y, Z (if 3 axes)).
To me, its easier to remember them in alphabetical order (Chastity, then Denial).

Also, I'm questioning why I labeled the Axes in such a convoluted way. "Always unlocked" to "never unlocked".
Why didn't I write "Always Locked" to "Never Locked"? Or should that be "Always Unlocked?"

That seems complicated. Why not just X,Y and both go up to 5.

Maybe I over complicated my explanation.

The X, Y is a given; I'm putting Chastity on X, Denial on Y. My thinking is that it's easier to remember alphabetical ordering.

Are you saying that 10 points is too much?

A while back, I floated the idea of a 5 level scale, but it wasn't enough to capture enough of the conditions, and after adding other levels, it just got too unwieldy. However, it wasn't this type of matrix.

My thinking is that, based on the discussions I've seen and had with people over the years, those guys at the extreme ends - the really serious players, the pedantic ones, and the other odd cases - will end up using numbers like 4.5 or 4.75 anyhow, so a 10 point might be enough or almost for them.
1 x
Tom Allen
The Edge of Vanilla
Denial Permanente
Top

@Jaciie4 As Tom says, 5 points might not feel “nuanced” enough to some folk. Scale is arbitrary, agreed.

In my mind, “never locked” to “always locked” and “never denied” to “always denied” makes sense. That works with “never” being 0 and “always” being 10.

And why that way around? Because this is describing the firmness of the core, as in, not core at all, soft core, hardcore; or said less whimsically, the cadence of chastity and denial play, not the cadence of release / relief.

@Tom Allen , I do think that once you have settled on what you want to label how and where your scale starts and ends, some guidance as to what scale numbers could roughly mean would be useful to people.

I can see a path from “play session” to “permanent” in 10 steps, I just didn’t flesh that out fully. Cart before the horse and all that.
0 x
Schnoff
My orgasm denial blog
Tango tangor ergo sum.
Top

And now, as someone who goes a couple of months with no activity (0,0) to suddenly starting activity (3,8), do I define myself as the average, or do I specify which state of the two I’m currently in?