So, as we all know its a risk wearing this cage day to day. Does anyone have any embarrassing stories from getting caught? As in, did someone in public see it? Public shower? Using the bathroom? Doctors office? Hospital? Paramedics? Nude beaches? I can go on and on. Maybe you told someone about the cage and it backed fired? Did someone find out that you didnt want too? DId someone dare you to do something embarrassing and it either went okay or ended up being embarrassing? Tell your stories.

Bump. Come on guys. There has to be someone or something that has Happened. Spill your beans
0 x
Top

During Thanksgiving celebrations, I tried to keep my distance with the hugs and my mother had none of that. I'm positive that she felt my cage and the rest of the evening was really, really awkward between the two of us.
0 x
Top

Cottus, do you usually rub your groin on your mother ?

maybe she thought you had an erection?
0 x
Top

Topics like this have arisen before, sometimes on more specific types of interactions or situations. Problem is, there are those who find getting caught kinky even though they may not cause it on purpose, but in either case they aren't embarrassed. And those who find it sort of like, or just plain really forcing others to partake in your kink whether overtly or by accident. I can see where it could be a turn on and I can see where there may be "eeeeewww, really?" types of situations, and then there's the real "oh shit" embarrassing ones and all shades of grey between. But the threads tend to split along those lines quickly, meaning there's several judgment replies, and thus they slither away. So the lack of many responses may be due to this.

I used a distant family member as a contractor. He was remodeling the bathroom in master bedroom. He was opening boxes in master bedroom looking for plumbing parts and ventured outside the remodel boxes. He opened the box containing the retired chastity devices.

He did not say anything and neither did I but we both know.

Nothing sexy about it. Just awkward.
0 x
Top

Everything is a learning opportunity. So if people shared how they were found out, such as the hug, it gives the newer people who werent around for the previous threads a resource for potential situations to avoid. So regardless of whether people found it kinky or not, it's still nice for us to see so that we can learn from other people's experiences.
0 x
Top

I was 19/20 years old had got off work early and decided to go up to the local wash/quarry(place to go spray paint) with some friends. turns out the neighbors in that area where up to their necks with so many young adults just destroying the nature site. so the police had been called as we had walked in and where waiting for us to come out unfortunately for me i was locked in my curve chastity device 1st one i ever owned i had been wearing it for 5/6 days had just purchased it. well anyways to the point i got arrested/booked in while i was in the back of the police car i will admit it was a bit hot to know i might be exposed while wearing hand cuffs but also very afraid i figured fist offence ill get a ticket boy was i wrong i was placed in a holding tank and while i was waiting to see what would happen next 2 officers came up to me and decided to do the pat down when they got near my private parts they said whats this i replied if we could go to a private room but no! and much to their surprise and my embarrassment they asked wth is that i said a chastity device and they said well can you take it off and i said i can but that the key was at home so they said what are we going to do then one of them got some bolt cutters and snap there went my 1st device my 1st public? humiliation was i embarrassed heck yes as much as its a turn on to get cought or think of others knowing this is something i hope never happens again. as for the device to avoid anymore humiliation from the lady that was longing personal items i just tossed it in the trash i wonder if they still remember im sure its happen to someone else since then welll thats my story.
Last edited by JS_ITR on Thu Apr 21, 2016 2:59 pm, edited 1 time in total.
0 x
Top 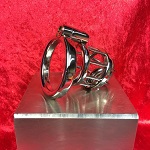 Can you shout any louder I cant hear you.....