We were looking for some T-shirts that displayed a KH/MC theme. We found two sites that had a wide variety of pre-printed shirts and will custom make your order as well. While we were looking we saw that the different lifestyles has a discrete symbol. One that if you were aware of the lifestyle you would recognize and if you weren’t it would mean nothing. The sites have shirts that say “I’m Locked”, “I’m the key holder” etc. but, that’s a little to open for us to feel comfortable wearing out of the house. We thought that we could find one with a discrete symbol we could wear these and they might be a conversation starter.

Does anyone know of a discrete symbol for being a KH or MC?

If anyone is looking for t-shirts, hats, coffee mugs, tote bags, mouse pads, etc. Café Press.com. and Zazzle.com have a good selection. You just search on your “kink”. Some links to get you started;

Well, there's the arrow pointing up with a box around it, but that seems to relate to being "owned" or a slave. That doesn't exactly fit everyone here.

Something discreet, but still conveys "I'm locked up"... gotta think about that one...
0 x
Top

I saw one somewhere with a picture of a rooster in a cage...

Yeah, I've seen those before. Since we don't live in San Francisco, I'd feel a bit conspicuous wearing one out shopping. We don't kink on public humiliation.

I've wondered if you could make a stylized "male/female" symbol with the Ares thing (the circle with the north-east pointing arrow), and instead of the female Venus symbol (and upside down cross) design a stylized key - like a skeleton key hanging from the circle, with the key section instead of the cross.

Did that make any sense?
0 x
Tom Allen
The Edge of Vanilla
Mrs Edge Says
Top

I recently blogged about this. A certain community neuters feral cats, and clips one ear, so that they can be easily identified. Someone was selling winter hats with ears on them, with one clipped, as a fundraiser. I thought it was cute.

If they would make one without the word chastity on it this might me discreet enough.
http://www.zazzle.com/chastity+gifts?pg=9

Here is the cock in the cage. The logo on the shirt is almost too small to see but the one at the top of the page is what is on the shirt.
http://www.cafepress.com/malechastity
0 x
Top

I guess I was thinking about something more simple. 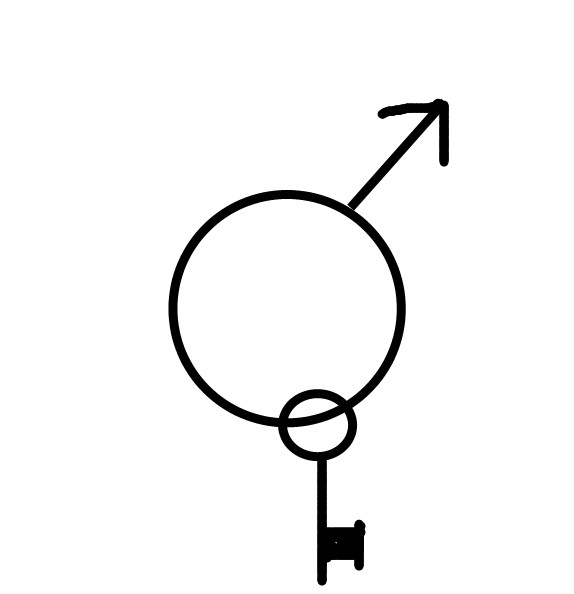 I hope I didn't hurt anybody with my mad artistic skillz.
0 x
Tom Allen
The Edge of Vanilla
Mrs Edge Says
Top

Very nice. Now, what is the reply when someone asks for the meaning?
0 x
Top

Why not just a little lock for the locked partner, and a key for keyholders? You could make little cloisonne' pins or some such. The issue I'm seeing with any design is that it seems like you want to communicate, but at the same time, you don't want to communicate. In that case, you really just need a glyph with no inherent meaning (like the Prince logo, or just about any corporate logo for that matter).

I like to wear the key around my neck, so I don't really need to display any other symbol than that - although I usually don't wear it when Lukus is out, so I guess for those times it might be nice. Mostly, those times I seem to be jonesing to pop him back in so there's not really a need for a reminder then.

D
0 x
The Key is on my Nipple Ring
a couple's explorations with a chaste life, from the wife's point of view
Dev's Gallery
my stash of good looking men
Keyheld: Chastity Resources for Lovers
Top
Post Reply
80 posts