I few days ago I left "Male Chastity, A Guide for Key Holders" on my wife's bed. I sealed it in an envelope with a letter printed on the front. 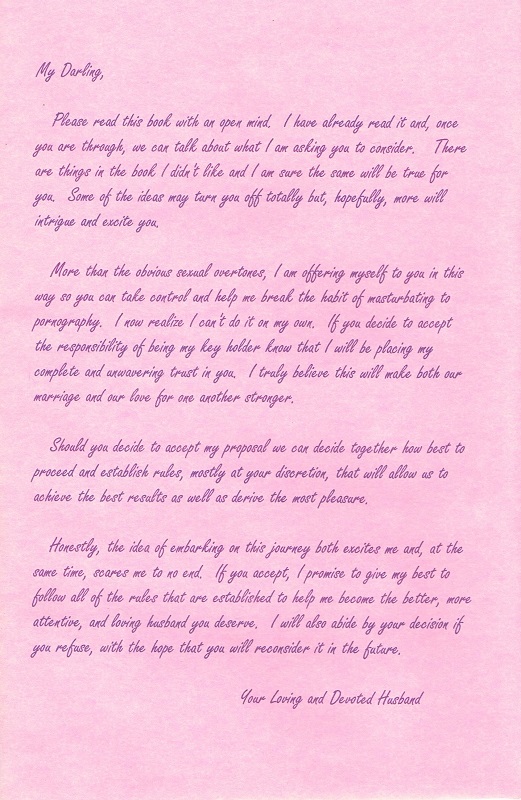 She brought it out to the living room unopened a little later. Her first reaction was negative, only commenting on the first sentence. I ask her to keep it in the bedroom and read it when she was alone and things were quiet.

Later that evening she came out to get something from the kitchen. When she looked at me there was a look of mischief in her eye that I hadn't seen in a long time.

After reading the first section she commented that the book was "intriguing". She asked if I had read all the way through and when I said yes she started to ask questions. I repeated what I said the letter, that when she was through reading the book we would talk about it.

Can't wait until she tells me it is time to 'talk'!
Last edited by KittensBoyToy on Thu Jul 05, 2018 8:13 pm, edited 2 times in total.
4 x
Kitten's Boy Toy
I'm Kitten's property and She keeps Her property secure in a Jail Bird!
Top

One thing that puzzles me is this: She asks questions and you tell her she has to read the entire book before you will answer. In the simplest terms, why?
0 x
Schnoff
My orgasm denial blog
Tango tangor ergo sum.
Top

Just that I wanted her have the most knowledge she could gain from the book first.

When she got up this morning she asked/told me to follow her to the porch. That led to an over 2 hour conversation culminating in her saying we need to order a device. She registered on the site so she can get into the keyholder forum and ask some questions.

It looks like this part of our relationship is now in her control and that part of my anatomy BELONGS to her!

Hopefully admin will allow me to change my user name to reflect that I belong with and to her. I have already sent a message to them asking about this and am waiting to hear back.
1 x
Kitten's Boy Toy
I'm Kitten's property and She keeps Her property secure in a Jail Bird!
Top

Ahh, reminds me of just what we went through many years ago. Very encouraging that she has registered here. Took my wife about a year before she would even consider being part of the group here.

One piece of advice. Take it slow. Don't overwhelm her. Remember, this is something that's almost always going to be on your mind, especially once you have that item locked on to you. For her, it's just another day.

I don't think I am going to have to worry about overwhelming her. Kitten has spent the better part of today either reading the posts on here, mostly in the keyholder forum, or looking and talking to me about different devices.

I am already in a self imposed chastity, albeit without a cage. We will be asking questions on different cages in the Devices forum before we make a decision as to which way to go. Hopefully that will happen in the next few days to a week.

I jokingly remarked that I had created a monster.

She said it was more like woke one up.

Kitten and I were on the back porch last night and she was using my laptop. After she finished I took it from her and told her I was going to bed. For reasons beyond our control I have been sleeping in my recliner for a while. A little before 2:00 AM I woke up to the feeling of her fingernails on my cock and balls. Not pain type use of the nails but teasing. As I came fully awake she alternated jacking me and using her nails from my chest to the tender area on the inner thighs. She kept teasing me for almost 20 minutes making sure I stayed hard but never got close to orgasm. She was watching my face and body movements, she told me later, and knew when to slow down. After she was done playing we went out on the porch for a cigarette. When we came back in she turned to kiss me the headed to the bedroom. The last thing she said was I wouldn't forget to kiss her goodnight again for a while.

This morning she told me she drifted off to sleep immediately. I, on the other hand, was awake for over half an hour. I woke up twice with hard-ons like I haven't had in a while. Voluntary chastity is going to be harder than I thought and told her so this morning. I ordered a knock off CB3000 from FleaBay today for Kitten to secure me with until we can get the measurements right for a HolyTrainer and, ultimately, a Jail Bird.
1 x
Kitten's Boy Toy
I'm Kitten's property and She keeps Her property secure in a Jail Bird!
Top

I was on the computer when Kitten came out of the bedroom this morning. She asked me to come out to the porch with her. After I closed the computer I started out and saw her in the kitchen starting to make her morning coffee. I told her to go sit down and I would bring it to her. Only 5 days since we first talked about my chastity and already I am finding ways to do small things for her and enjoying it. After meals I automatically clear the table and, after we have a cigarette, I go clean the kitchen.
1 x
Kitten's Boy Toy
I'm Kitten's property and She keeps Her property secure in a Jail Bird!
Top

The plastic sizing rings from MM should be here today or Saturday and the knock off CB3000 is supposed to be here by Tuesday. Nocturnal erections don't really bother me since I go right back to sleep but I woke up to one this morning and had to work to stay hands off. I keep reminding my self that I made a commitment and a promise to my loving wife that I WILL honor. Only a few more days until 'help' arrives!

I will probably order a knock off HT and a couple of different China stainless steel devices, with Kitten's approval, to make sure we have the sizing right before ordering the authentic HT and her Jail Bird. These are the 2 she has said she wants me to have, with the Jail Bird being the one she plans to keep me in most of the time.
0 x
Kitten's Boy Toy
I'm Kitten's property and She keeps Her property secure in a Jail Bird!
Top

Things are happening faster than expected. I ordered the sizing rings on Tuesday, MM put them in the mail Wednesday and I got them yesterday (Friday). Late last night I took a shower and went in to put one on. We decided to start with the 2" ring feeling that the 2 1/8" would be too large. Much to Kitten's disappointment I put the ring on myself while she watched. She had not been feeling well and I wanted her to stay down and relax. Having no discomfort or problems I went to sleep with it on.

This morning I went into the bedroom to check on her. She was awake and asked if everything was still ok. I told her it was and that I wanted to try the next size down. As she sat up and got the 1 7/8" ring out I 'dropped trou' and stood next to the bed for her to change the rings. She said she was worried about her fingernails, which are about 1/2" past her fingertips, catching some loose skin and asked several times if she was hurting me. I assured her she wasn't and, in spite of my reacting to her manipulation and the occasional touch of a nail, she got the rings changed. Commenting on my growing, she spent a few minutes with me standing there as she teased me with her fingers and those wonderful nails. Kitten seemed to be enjoying her new found power and I was in heaven! I am reacting just thinking about it and typing this.

As I said in the beginning, things are moving fast. I am tracking 2 packages coming in the mail. Her new motorcycle helmet was supposed to arrive Monday. The other package is the knock off CB3000 and wasn't expected until Tuesday. I got a notification email from the PO that both packages are out for delivery today.

I was hoping to spend a full day in progressively smaller rings as I found the right size but Kitten has told me she wants me locked up as soon as the cage arrives. It will be her decision to make as to how and when things happen and mine to accept. I will just have to wait to find out what is in store for me. She told me a few minutes ago that she wants to go out for dinner to celebrate when I am first locked up so I don't know if she will be willing to wait a couple of more days.
2 x
Kitten's Boy Toy
I'm Kitten's property and She keeps Her property secure in a Jail Bird!
Top
Post Reply
312 posts